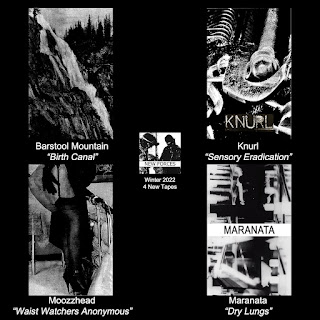 Barstool Mountain - Birth Canal Cassette
Barstool Mountain is the new alias of Sweden's Mattias Gustafsson, the artist behind the incomparable Altar of Flies. After quietly releasing two tapes on his own Hästen & Korset imprint, New Forces is pleased to bring this project to a wider audience. Mattias describes Barstool Mountain as the "primitive and raw" alternative to Altar of Flies. The recordings are more spontaneous, live sessions that capture a heightened energy. Pushing the intensity of recent Altar of Flies recordings so far that a new project was necessary. A fantastic example of the evolution of Sweden's fantastic noise scene.
Moozzhead - Waist Watchers Anonymous Cassette
Lusty harsh noise from this long-running Finnish project. Thick crunch combined with a dynamic, fast-paced sound and an active stereo field. Riding the razor's edge between precision and chaos. Moozhead presents a fresh take on a classic style. Noise as obsessive sensuality.
Knurl - Sensory Eradication Cassette
For more than 25 years Alan Bloor, the architect of Knurl, has been forging a singular approach to sound without rivals or imitators. Sensory Eradication was recorded in 1998 but never released, and New Forces couldn't be happier to rescue this gem from the vault. White-hot sheets of scrap metal noise shred the listener to pieces for 40 glorious minutes. Bloor's transcendent focus on the sonic properties of metal produces a similarly meditative response from the listener. This is noise you can get lost in. An impressive document of aesthetic focus everyone needs to hear.
Maranata - Dry Lungs Cassette
Maranata are the duo of Dag Stiberg and Jon Wesseltoft. Blending harsh electronics and saxophone into an ear-melting noise assault, they have been a fixture of Oslo, Norway's underground scene for decades, often collaborating with Lasse Marhaug. On Dry Lungs Maranata will satisfy the most masochistic of listeners. Comparisons could be made to Borbetomagus or Wasteland Jazz Unit, but Maranata is very much its own thing. The electronics are far more prominent, and interact perfectly with the flailing saxophone that stabs repeatedly through the noise. A perfect sonic whirlwind that will leave smoking tape decks in its wake.
In addition, the store has been updated with many new distro items including a big box from Old Europa Cafe as well as Swedish underground titles from Discreet Music. Thanks again for your support.
Order here: https://newforces.bigcartel.com
Distros and record stores: please email newforcesnoise@gmail.com for wholesale rates
Posted by Stefan at 5:30 PM No comments:

Located in Ithaca, NY
email:newforcesnoise at gmail dot com
Discogs
To be added to the mailing / update list, send a message to the email address above.